Dude, Where´s My Visa? STAND UP COMEDY | The Wall Comedy

Buy tickets for:
Dude, Where´s My Visa? STAND UP COMEDY | The Wall Comedy

Dude, Where´s My Visa? STAND UP COMEDY | The Wall Comedy

The Wall Comedy, Comedy in English Berlin and Tera Comedy

Love expats? Can´t stand us? Come with friends, with enemies for laughs; drink available in the bar before and event the show. At Berlin´s friendliest English speaking Comedy Club! Everyone welcome. Dude, Where´s My Visa? STAND UP COMEDY brings together Berlin´s most regularly working/hustling stand up comedians, from all over the world, for a night of fun. This End of Year Special Edition features 3 comics, plus a long feature set from the hostess with the most, Tera!
DOORS/DRINKS 8:00pm ← (Otherwise known as, sigh, 20Hr.)
SHOW 8:30pm. We are at The Wall Comedy Club in Fshain.
English Event. First come first serve for seats. Reserve online for guaranteed entry.
RESERVE for FREE on Eventbrite. Donations after the show. Suggested donation is €10. We know you will love it!
RESERVE for FREE on Eventbrite. 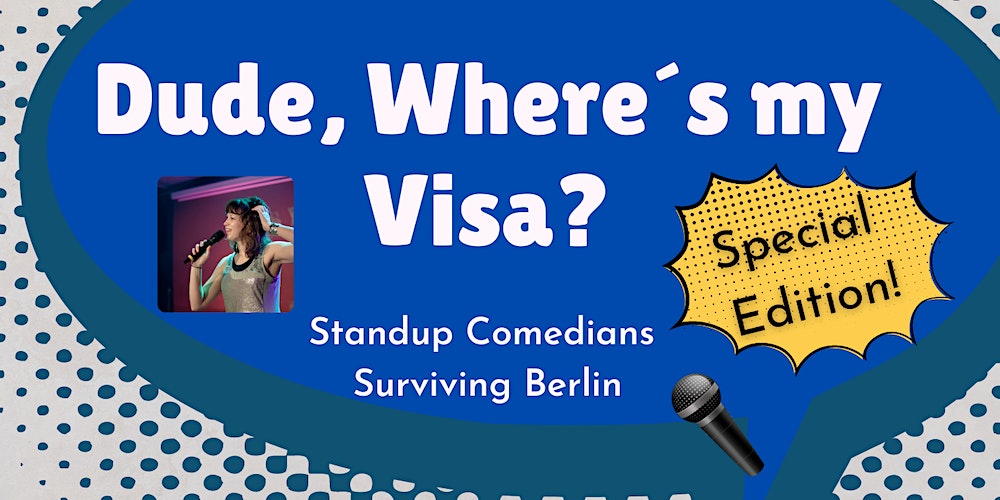 Dude, Where´ s My Visa? STAND UP COMEDY

We can´t wait to turn it out for you! These international acts perform, host, and produce all over Berlin and beyond, so you know it will be a quality night.
Comedians: Tera Comedy + 3 fabulous guest comedians!
Follow: IG: teracomedy_ TikTok/FB/Eventbrite: Tera Comedy
TERA KILBRIDE Tera’s an international stand up comedian, host and producer, , originally from the United States, living in Berlin. Don´t be fooled by her casual and friendly demeanor, Tera is a highly trained professional with over 25 years of stage experience! She’s performed in several European countries, and the continental United States. Her content tackles mental health, sex and dating, current dark times, and being an expat in Germany. She produces several comedy shows, including GLOW, This Could Get Awkward Open Mic Stand Up Comedy Nights. DM for bookings. Credits include: Hamburg International Comedy Festival, hosting Berlin New Stand Up Awards.
“Intensely combustible, ebullient and riotously complex. Something for everyone.” Minnesota playlist
“Tera Kilbride, takes on late-stage capitalism … dystopia” City Pages, Minneapolis

Buy tickets for this events now: Dude, Where´s My Visa? STAND UP COMEDY